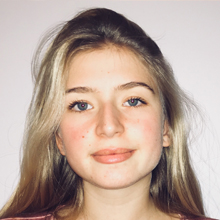 “YYGS was a chance to discover my passions. Concepts I had only ever seen in books came to life in an environment bubbling with ideas and curiosity. It was moving to listen to professors explain problems as convoluted and present as the effects of COVID-19 on the global economy, and realize that this was what I wanted to do in the future. It was truly eye-opening. Enchanted by the sophistication of their arguments and thrilled by the novelty of it all, I uncovered debates that I wanted to discuss further, views that I wanted to read about, and research that I was eager to conduct. My interests became clear to me.”

After completing YYGS, I accepted an invitation to become a Climate Reality Leader at Al Gore’s Climate Reality Project. Over the course of two weeks, I participated in the organization’s leadership training, where I discussed climate-related issues among scientists, politicians, activists, and economists. I attended lectures by Al Gore himself, as well as from other prominent figures who also belong to the NGO. I am now a leader in the Spanish branch and have organized presentations for the youth to spread awareness and advocate for the fight against climate change. I have always been passionate about environmental activism and could not have been more eager to join the team!