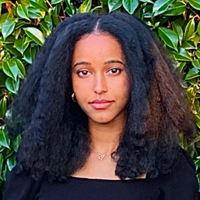 ” My biggest takeaway from YYGS was the value of different perspectives. Beyond exploring and inquiring about a topic, I learned to look for interdisciplinary connections and their real-world applications.”

A group of kids—none older than 10—sat huddled, across the street from my house. They had their knees tight to their chests, cocooned by their thin shirts, as they sniffed on the bottles of benzene, a desperate attempt to keep themselves warm in the harsh cold nights. This was not new to me. Fifty thousand people in Addis Ababa are homeless. One-third of them were refugees chased out of their homes due to back-to-back war amongst ethnic tribes in Ethiopia. People like the kids across the street were filtered out because of their tribal roots and blocked from gaining any access to the millions of necessities donated every year.

“Fabric for Others,” a network of volunteers I created over two years ago, aims to reach those people and provide aid to them directly. Our mission is to reach marginalized individuals within marginalized ethnic groups. I started by stuffing my bag with abandoned uniform sweaters from the lost and found pile that my school was preparing to give away and gave them to those kids across the street. Soon enough, I began collecting donations from my neighbors and involving my family and friends to collect clothing—which we gave to homeless people directly.

In the coming years, while Fabric for Others continues in Ethiopia, I hope to further support people like the kids in my neighborhood by expanding to rural areas, which have an even higher percentage of homeless refugees.