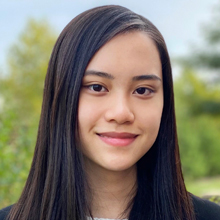 “My favorite lecture was, ‘Understanding the Backlash Against Globalization Theory and Data,’ presented by Professor Peter Schott. Although I had previously taken economics and was exposed to many of the ideas and models mentioned in the lecture, I was fascinated by the real-world connections that Professor Schott made, such as the impact of trade on manufacturing as well as recent economic changes due to the pandemic. To me, school curriculums have often felt restrictive in their theoretical nature, and rarely were the ideas we learned applied to analyze the events unfolding around us like they were at YYGS.”

Since attending YYGS, I have begun a fellowship at a local Democratic Congressional Campaign—Christina Hale for Congress in the 5th District of Indiana—and attending YYGS has definitely underscored my interest in political science and public policy.

Specifically, I work on the field and finance teams and one of my most important responsibilities as a fellow is to reach out to voters and expand the impact of the campaign, whether through phone banking, text banking, or volunteer recruitment. The most fulfilling part of my work by far is speaking to undecided swing voters and being able to hear myself slowly persuade them to support Christina. The 5th District race is one of the most competitive nationwide in this election cycle, so every vote is truly critical to the outcome.