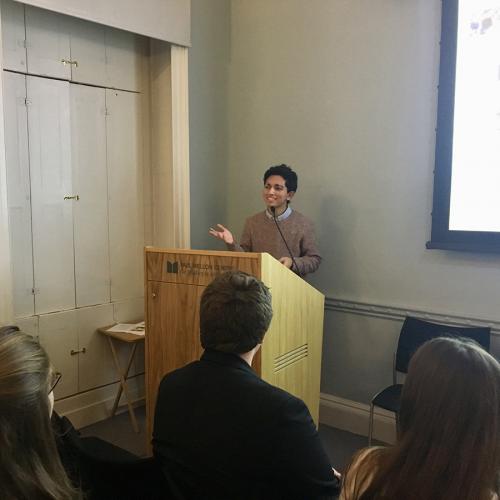 Earlier this month, Adam Ramgoolie (ATC ‘17) brought a strong YYGS presence to the United Kingdom by working in collaboration with the Paul Mellon Centre* to facilitate a YYGS information session in London. Adam, with the help of six other YYGS alumni, presented information about this year’s program and offered insight as previous participants. While Adam attended the YYGS-Beijing session in 2016, the panel represented other sessions as well: Claire Beck-Belaman (ASE ‘17), Eric Spies (PLE ‘17), Liberty Jones (FMS ‘17), Lizzie Westley (FMS ‘17), Teona Mango (IAS ‘15), and Trinity Donohugh (TIE ‘16).

The session provided more than just general information; Adam wanted to showcase the new Asia in the 21st Century session that will take place in Beijing this summer, in addition to describing YYGS capstone projects, the program’s global emphasis, and offer in-depth views on the alumni experience. The session was a huge success! Nearly 30 students, parents, and school administrators attended the event. Adam describes the event in more detail: “The session was very exciting; not only did we get to spread what we love about YYGS and in turn reunite with so many memories, but we were also able to meet other like-minded individuals and managed to ‘click’ instantly.”

The session also served as a source of inspiration. Since the session ended, Adam has met with a fellow alumnus and session attendee to develop a future charity project. As Adam notes: “To me, the session encapsulated everything that YYGS meant, and clarified the features of a ‘YYGS’er’ - an excitement for life, a global view of thinking, and an ambitious, determined drive. The session was informative for others, so I am told, and it was incredibly rewarding for us alumni - I would recommend anyone interested in sharing the impact of the YYGS experience to do one, and anyone interested in the YYGS experience to attend!”

YYGS offers its sincerest thanks to Adam Ramgoolie, his fellow alumni, and Nerim Abdulla from the Paul Mellon Centre for all their hard work in organizing this event and spreading word of our program in the United Kingdom.

*The Paul Mellon Centre for Studies in British Art is an educational charity committed to promoting original, world-class research into the history of British art and architecture of all periods. The centre collaborates closely with the Yale Center for British Art, and is part of Yale University.