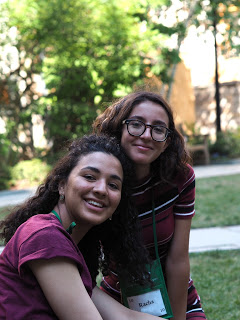 After attending the 2017 Politics, Law, & Economics session, Racha reflects on her YYGS experience:

I’m Racha, also known in YYGS as the talkative Tunisian girl. I’m 17 years old and a sophomore in a Tunisian public high school.

Before I tell you about my YYGS journey, I think it’s important for me to mention the journey that got me there. I can’t exactly recall how or when I first heard about Yale but I know that I learned about it from an American movie because that’s how foreign kids my age learn most things about “the American lifestyle.” At the time, the idea of visiting Yale was such a far-fetched dream that I couldn’t possibly say it out loud.

But that changed when I first heard about the program in the summer before I became an exchange student in the US. Two Tunisian alumni had just returned from it, and I was urging them to tell me all about it. Seeing Tunisia represented in a program such as YYGS brought me such genuine joy and hope. I was happy to see that people from my country could participate in such activities and hopeful because my dream wasn’t as far-fetched anymore.

I didn’t know about the Middle East Student Leadership Award back then but I still applied because this wasn’t an opportunity I could miss.