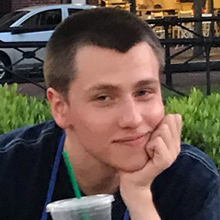 Since I departed from YYGS, I started working on a project that me and my older brother shared. In 2018, we made a game in twenty-four hours called “Shamen” for Game Jam Georgia and we won first place. My brother’s major is computer science and he’s in charge of the programming aspect of our two-man team. Accordingly, I’m responsible for the design and artistic aspect of the game. Since we only had twenty-four hours for the game, it was lacking many aspects that we wanted to add to finalize the game, but we never found the time. Due to our free time this summer, we managed to complete 80% of the game.

Watching my brother work on the game made me more interested in the field of programming and consequently motivated me to decide on computer science as my major. He taught me fundamental aspects of code, which I recently applied to my other newfound passion - cooking. I spent the remainder of my summer with my grandma, where she taught me how to cook to be better prepared for college. She taught me everything from making soups to baking traditional Georgian cakes. The way I applied coding to this was that I digitized my grandmother’s handwritten traditional Georgian cookbook and made a small program for personal use, which asks what ingredients I have at home and gives my grandmother’s recipes for all Georgian dishes that could be made from the ingredients at hand.

From there I started thinking about the lack of English translations to endemic Georgian herbs and spices, so I decided to join the Google Translate Community, where I moved from spices to dishes to everyday words, for which the automatic translation was incorrect. I already contributed 300 certified translations from Georgian to English, 100 more from english to Georgian, and even some from German to Georgian. And I plan to further translate more words and hopefully facilitate the experience of communicating the Georgian language in English.