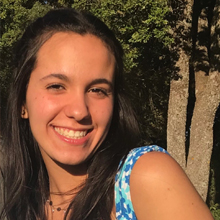 “My Capstone project also affected me in far more ways than I could predict. My group’s project topic on the ethics of journalism during American war, the research we put into it, and the presentation we made introduced me to new ways of research, more complex analyses of ideas I had once thought simple, and to friends who taught me and learned with me on a daily basis.”

Before YYGS, I knew that I wanted to become a lawyer. I’ve always been a person who sets her mind to do something and won’t let it go. However, YYGS changed that. My opinions and beliefs were challenged by my peers, and I realized there was still a whole new world for me to explore.

I still want to be a lawyer, but I learned that I needed to work more for it.

Encouraged by friends I made at YYGS, I joined my school’s debate team. Since them, I have attended and competed at tournaments (on the Morocco Circuit), gotten first place in two tournaments, and have become team captain. I’ve learned to argue, do extensive research, let go of my personal convictions for the sake of debate, and think on the spot when a difficult question comes my way.

Without YYGS, this would have never been possible. My YYGS friends were the ones who encouraged me to join the team. My seminar leaders showed me the use of tools to communicate ideas. My Capstone group taught me to do academic research.

YYGS and debate have both helped me open my mind to new ideas, improve my argumentation skills, and continue to pursue the field of my passion.