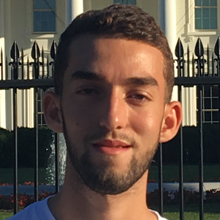 “What makes YYGS such a unique experience is the program’s ability to bring together the world’s most brilliant high schoolers to form an intimate community. I left YYGS with new friends from around the world, knowing that we will all go on to solve the world’s most pressing issues and become future global leaders.”

In October 2017, I was diagnosed with osteomyelitis, a bone marrow infection, in my foot.  I had to undergo surgery and take antibiotics, but soon after, the infection returned.  My doctor explained that certain bacteria develop multiple resistances to antibiotics leading some antibiotics to be ineffective. I then had to receive long-term IV antibiotic treatment.

I already was interested in biology and took many biology-related classes at school, so I began to learn more about the antibiotic resistance crisis. Bacteria can develop multiple resistances, making them known as “superbugs”. Superbugs are expected to claim more lives than cancer by 2050. I learned that this is a growing global health crisis, and if we do not do anything about it, there will be major consequences for years to come.

I began contacting local university professors, aiming to start my own research project to address this issue. Thankfully, an assistant professor of biology at the University of Alabama in Huntsville allowed me to work in her lab. The professor has taught me about the many microbiological mechanisms involved with antibiotic resistance and provided me with guidance on using proper lab techniques. I am now working on a research project that will test the effects of indole and other organic compounds on horizontal gene transfer, the mechanism through which bacterial cells transfer DNA. I have made sure that I am testing the horizontal gene transfer of antibiotic resistance genes through a series of procedures that spread the antibiotic resistance genes to multiple colonies. If the organic compounds are shown to be inhibitors of horizontal gene transfer, this will have many implications on dealing with the spread of antibiotic resistance. These compounds could be developed into an agent that can be applied in various clinical settings and can even be applied to farms that may use heavy amounts of antibiotics.