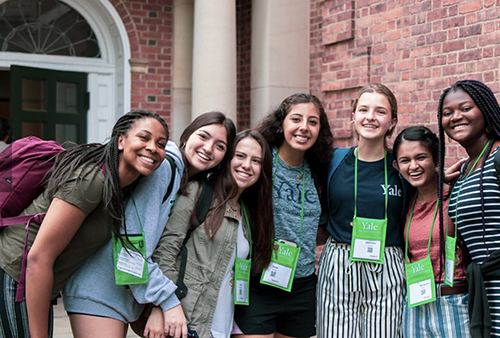 “Don’t tell them you’re Iraqi,” my mom often warned, “you’ll put yourself at a disadvantage.”  Ever since 2003, Iraq has been a broiling political topic, especially in the United States. As refugees, my family and I learned to be careful about disclosing our origins due to the negative connotations associated with being Muslim, Arab and Iraqi. But on the morning of my flight to New Haven, Connecticut, my mother ditched her usual protective nature in favor of a reassuring, “be strong, be confident and be yourself because only then will you enjoy this experience.” It wasn’t until I experienced YYGS that I realized what she meant.

Never before had I experienced an international program such as YYGS that promoted diversity as source of pride and connection. Cultural background is not celebrated as a source of strength in my school system, so I have always felt a need to conform myself to be more uniform in American society. YYGS is one of the very few programs in the United States that encourages you to stop trying to fit into a community and to instead allow the community to fit you. Upon introducing myself as an Iraqi American, every single member of the YYGS community greeted me with open arms and an open heart. My heritage and experiences as an American Muslim was used as a point of conversation, comparison with others, and as an educational opportunity for many. Cooperation, tolerance and respect trickled into the veins of YYGS with every cross-cultural conversation.

My experience at YYGS is something that I will hold closely in my heart for the rest of my life. My seminars fascinated me because they were finally focused on my passion for global affairs. From the global water crisis to progressive Islam to the UN Security Council Response to the Syrian Civil War, I felt immersed and engaged in topics that finally satisfied my desire to enhance my knowledge on global affairs. In addition to this, the open, supportive environment allowed me to build amazing relationships with friends from Poland, Rwanda, Kenya, Wales, Brazil, Guatemala, Mexico, Italy, Australia, India, China, Hong Kong, Saudi Arabia and many other countries. Although I was scared of possible reactions, I even felt comfortable enough with my peers to conduct a speech on Feminism through Islam, which was a controversial topic I felt very strongly about being a Muslim woman myself. Even with the polarization surrounding Islamic Feminism, my open-minded peers listened attentively on that night and felt informed afterwards, telling me that it shed light on an often ignored subject. It wasn’t until that evening that I realized that YYGS embodied my mother’s message, making me feel strong, confident and most importantly, making me feel like I was truly being myself.

Today, on my final day of YYGS, I look back and I see the memories that live on in Yale’s beautiful campus. I see the laughter, the note taking, the debates, the copious coffee shops, and the smiles. I see the joyous life I led for the past two weeks. I see the bright sunshine that encapsulates the Yale campus, and I know that I am strong, confident and myself.